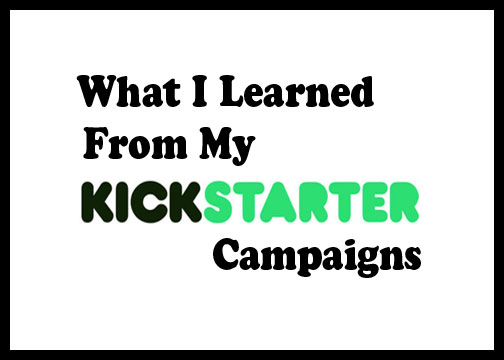 Over the course of 2013 and 2014, I ran three successful Kickstarter campaigns: two for issues of a ‘zine I publish, and one for a collaborative art project. Along the way, I made a lot of mistakes, but I also learned a great deal about how Kickstarter works, and how to reach the goal of a successfully funded campaign.

Do Your Research Before You Launch

Before you launch a campaign, start with a little research. Do a search on your topic, and scroll through projects that are in the category in which your campaign will be included. Find projects that are fully funded, or close to reaching their funding goals.

Start With a Short Video

According to Kickstarter, projects with videos are more likely to succeed than those without them.

Offer a Variety of Rewards

When it comes to rewards, the key is to let people give you as much as they want. That means having reward tiers that start at $1, and go up to $1,000 or more, with plenty of options in between.

It helps to start by developing a list of digital or intangible rewards that can be offered at lower levels. Rewards like a mention on a Facebook page or web site, or a thank you in a publication give low bidders something that doesn’t cost you anything but a few minutes of time. Digital goods, like a .pdf copy of a publication, a screensaver, or a download may take a bit more time to pull together, but are easy to deliver, and don’t require postage.

I like to create a spreadsheet, and build rewards from bottom to top, adding on to each level to build the next one:

Remember to use the same terminology as you build. For example, don’t say you’re sending a postcard in one reward, and call the same thing a postcard print or personal message in another.

I also prefer to list everything in each tier, rather than adding “and everything in the previous tier” or similar language. If someone is thinking of pledging $1,000, I want them to see the long list of things they’re getting, without having to scroll up and decipher exactly what that list includes.

If you’re offering physical goods as rewards, you have to pay shipping costs. Remember to add those in when you’re figuring out your reward levels. Don’t offer something that costs you $10 to produce as a $10 reward if it costs $3 to ship it, or you’ll be losing money.

Creating a Campaign is Just the Start

Many people approach Kickstarter like A Field of Dreams: if you build it, they will come. Let me assure you, this is not the case. If you build a Kickstarter campaign, backers will not just magically appear on your doorstep. Building a campaign is just the first step in raising funds. You really have to go out and beat the bushes to find your backers. Be prepared to spend a little bit of time promoting your campaign each day of your funding period. 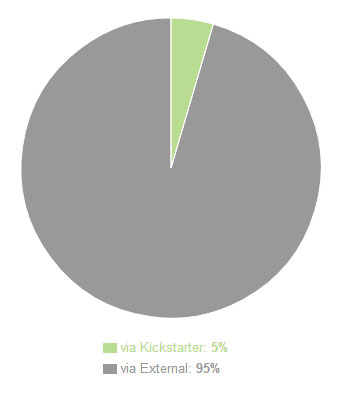 Talk To Your Backers

Your backers expect to hear from you. Kickstarter provides a tool to update backers. If you don’t post something every few weeks in that period between the time the project is funded, and when the rewards go out, you will get emails. Be sure to update regularly, even if it’s just to give a progress report on how production is going. Plan on sending out a short message each time something significant occurs. Photos of boxes of the reward items arriving, or being packed to ship out are reassuring to your backers, and also sort of fun.

What You Raise is Not What You Get

Kickstarter takes 5% off the top of any money your campaign raises. If you’re in the US, your payments will be collected by Amazon Payments, which also takes roughly 5%. That’s 10% of the money you raise that you won’t ever see.

In addition, there will be people who pledge to your campaign, but don’t follow through with payment. In each of my small campaigns, there was at least one person whose payment didn’t clear by the deadline, and didn’t respond to email prompts to complete their payment.

If you need $1,000 in financing to make your idea a reality, you should set your campaign goal at least 15% higher, to cover the cost of fees and losses.